None But the Brave 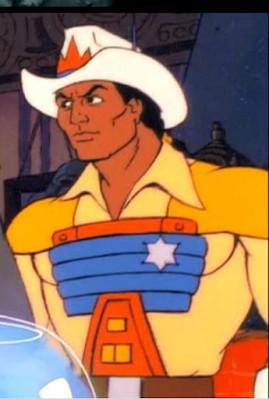 By 1987, the conservationists of the animated television world, Filmation and Mattel were teaming up for their next recycled product in their line of manly interplanetary heroes with friendly wizards and special swords to save strange universes. Bravestarr was created by (again) Lou Scheimer and ran for (again) a meager 65 episodes, each 25 minutes in length.
In a distant galaxy known as ‘New Texas’, natives called ‘Prairie People’ live among predatory beings such as Solacows, Apecats, Coyotoids, Broncosaurs, Krangs, Reptillianoids and Sand Walruses! Keeping law and order in this cosmic Wild West is Bravestarr, an American Indian ‘Matt Dillon’ of sorts who can telepathically summon animal friends in his quests. The most loyal of these benevolent beasts is an “equestroid” deputy called Thirty/Thirty who can walk on two legs like Quick Draw McGraw when not galloping to the rescue with the mounted Bravestarr.
The noble star packers’ rivals include the ‘Carrion Bunch’, a gang of outlaws led by ‘Tex-Hex’, a former prospector of New Texas’s coveted red mineral and fuel source, Kerium. 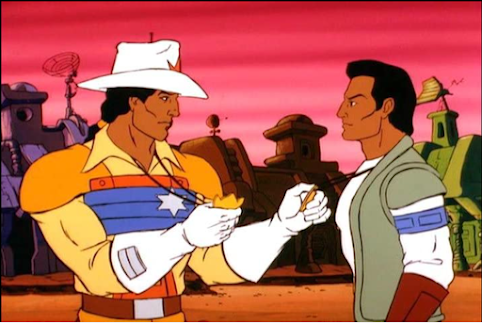 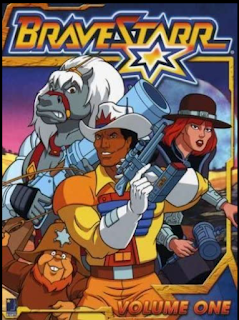 Tex-Hex reports directly to an obligatory mean skeleton dude named Stampede, a Broncosaur who calls on the egregious forces of the planet’s wasteland to wage battle against Bravestarr and ‘Shaman’, his fatherly and mystical ally who wields considerable extra-sensory powers often used to contact the hero during periods of danger (See: ‘The Sorceress’ from He-Man and the Masters of the Universe and ‘Light Hope’ from She-Ra: Princess of Power).
Ultimately, while this flash-in the-pan from Mr. Scheimer would prove to be Filmation’s swan song, it embodied their recurring themes that thrilled and educated its young fans every week. Space was certainly the final frontier but Bravestarr showed us that the limits of the imagination would, by contrast, remain forever infinite. 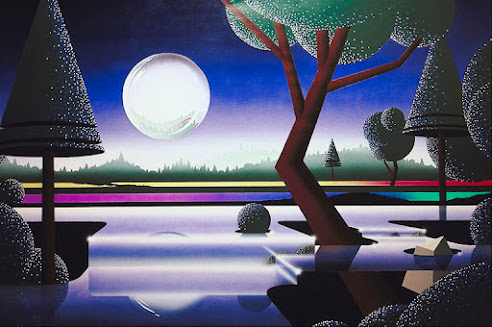 A séance has been held. That was the only way I could begin to describe the events of a recent trip to Atlantic City where I just may have participated in one of the greatest of all paranormal happenings.
Strolling by the boardwalk vendors, my friends, Tim, Vinnie, Vinnie’s wife, Bonnie and myself were somehow prophetically drawn to a neon sign-GREATEST PSYCHIC IN WORLD-MADAME OUSPENSKAYA $10 PER PERSON. My cynicism was firmly in check but Tim and Bonnie thought it was an experience we had to share before leaving the following morning. So, reluctantly I went along with it and the four of us entered the small shop adorned with peeling wallpaper and ubiquitous incense.
An elderly woman in black garb with a simple string of beads greeted us in a seemingly Russian accent, collecting forty dollars from us with instructions to follow her to a small round table with three lit candles near a wall where she was apparently brewing some potent tea. We all sat down as we took a quick glance at our surroundings.
“Please to put away your cigarette. Then we begin.” She directed Vinnie.
“Come on, you’d do it for Ravi Shankar.” I quipped, realizing I probably should keep quiet.
He put his cigarette out in a nearby saucer and Madame Ouspenskaya seemed content to continue. My friends exchanged some glances and then waited to see what was next. No one spoke for almost a minute until Madame Ouspenskaya closed her eyes and asked that we join hands. As we did so she quietly uttered some words that we took to be invocations for the beginning of the ceremony. 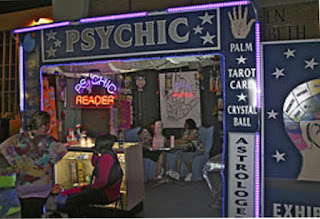 “What are we here to do today?” No one answered. Our eyes were closed but we knew none of us had properly figured out any purpose for what we had come for, if this was, in fact, a séance. So, to avoid embarrassing our medium or my cohorts, I spoke up. I didn’t want to insult this nice woman but at the same time, I was trying not to say or do anything to get us tossed out. We should get something for forty dollars, right? I didn’t know what to say but began talking (I do that from time to time). On this occasion, it proved beneficial to my curiosities regarding the unexplained. I opened my mouth, from which the words came.
“Can we talk to someone’s spirit?” An uncomfortable moment passed as I thought we would all be shown the door amidst a string of Russian profanities. She quietly responded.
“Madame Ouspenskaya will try. That is what she does.” I wondered if that meant that she does it, or tries to do it. “Whose spirit?” she asked. More silence.
“I guess…” What does one say? Where do you go with something like this? My friends must have been rolling their eyes at each other. I had to get this going so we could finish up and get out. 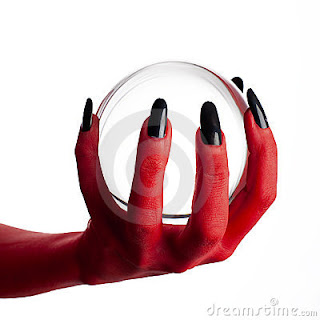 “I guess I want to talk to someone that I could write about. I write sometimes for… well, it’s an online publication called Western Magazine Digest.” She interrupted me right there, her voice now more pronounced as though she had received something.
“I think… that someone wants to talk to you.” Really? Wow! I thought I’d have to tell her a name of someone I was thinking of. Maybe she had her own ideas.
“He rides a horse, yes?” Hey, Is she talking about who I’m thinking? “Near… a red… river?”
Woah! It seemed Madame Ouspenskaya knew who it was, or better yet, had him ready to talk with us, right there. Could it be?
“Yeah.” I responded, trying not to show obvious signs of excitement about this.
“He has grit… he has true grit, yes?” Do you believe this? She’s doing it. She’s contacting the man himself, I thought.
“Yes, Madame Ouspenskaya. Yes, indeed!” By now I couldn’t hide my exuberance.
“And he rides… tall in the saddle, yes?”
“Yeah. He does! He does!” I replied.
“
"His initials, they are J-W?” she asked. 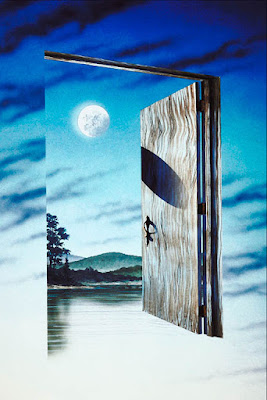 “Yes, that’s right!" I exclaimed.
She paused and proceeded with the portentous revelation. “He has something to say to everyone… all over the land.” We were in awe. What was he going to tell us?
She continued. “He says we need to remember … that even when so much is happening, that this land, America, it is strong. It is a beacon of hope and aspiration for all. Must remember our laws are good and they prevent tyranny. Also, dissent and free speech, they are good things because we make our decisions in elections. And… that we will always have freedom of religions and choices and it is a just land and those are things to be proud of and defend. We also must honor the people who defended them.”
Jackpot! We hit the jackpot… and we never even went into the casinos!
“What else? What else?”
“Nothing else.” She whispered. “But yes, he says one more thing.”
“What?”
“He says when the road looks rough ahead, remember the ‘Man upstairs’ and the word ‘hope’. Hang on to both and tough it out, pilgrim.”
Incredible!
“Thank you, JW! Thank you for everything! Thank you, also, Madame Ouspenskaya. You really are the greatest in the world!” She simply blew out the candles and gestured us all to the exit. What was thrilling for us must have been emotionally draining for her.
We walked out onto the boardwalk, speechless. We were still partly in shock from what had occurred in that place as our vacation resumed. Who would have guessed that I did the unimaginable? Did what others have tried in vain to do for so many years, actually communicate with the spirit of the one, the only… JACK WEBB! What he was doing on that horse, though, I’ll never know. 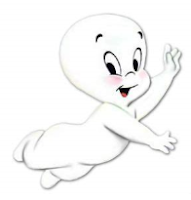