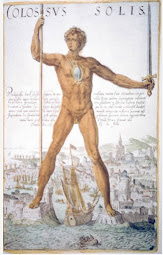 Around 280 BC, a sculptor named Chares and a 300-man crew constructed a statue of the Greek god Helios on the island of Rhodes, completing it in only twelve years. The giant bronze figure which stood 108 feet high at the mouth of the city’s harbor was erected in celebration of Rhodes’ liberation from armies in Northern Greece.

For a period of 56 years the Colossus stood at the port attracting mariners from other lands as one of the world’s Seven Wonders. 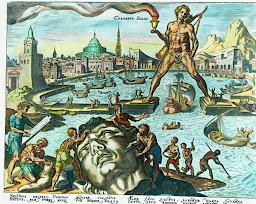 At some point around 226 BC it was toppled in a devastating earthquake, supposedly snapping at the knees. Its titanic remains were left where they laid for fear of defying a religious oracle. For another 800 years, the Colossus, even in ruin, continued to marvel those who beheld its awesome sight.

The precise location of the Colossus remains unknown. Nor is there any certainty regarding its appearance or pose. Much of those inferences are rooted in the poetry and literary references of the Hellenistic period, which lend themselves to vague embellishments. 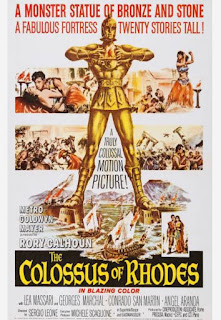 In Sergio Leone’s 1961 film, The Colossus of Rhodes, Rory Calhoun portrays a Greek soldier who assists in a siege of the Colossus in a plot to overthrow the king of Rhodes. The statue in the film is scaled much larger so as to house arsenals and accommodate armies inside. The Colossus is also depicted as being made of hollowed brass and its massive scale enables it to straddle the harbor to breathtaking effect.

Though its moment in the sun was a fleeting one, the towering figure certainly made an impression. As in Newton’s law of universal gravitation, however, what goes up... must come down.