Adorning the seals of Mercer County and Princeton Township in New Jersey is a giant white oak tree. The tree has its own special story and that story is inextricably merged with the early history of America itself. During the War of Independence, Brigadier General Hugh Mercer and 350 of General Washington’s Continental Army were met by British regiments in an orchard owned by a Quaker farmer named Thomas Clarke. 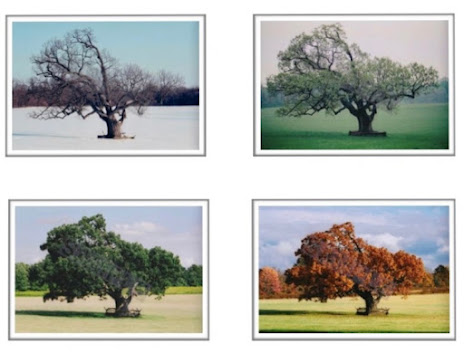 Photos by: John S. Rounds. For more, go to https://mercerartnj.com/
During the battle, Mercer was wounded by a British soldier’s bayonet and was said to have rested at the trunk of the oak tree, refusing to leave his men. He later was moved inside Clarke’s farmhouse where he died from his wounds nine days later.(I previously thought the event had taken place in 1776 but later learned that it had, in fact, happened in early 1777, after making it through 386 pages of David McCullough’s book which was interestingly titled... 1776)
The tree came to be known as the Mercer Oak, a significant symbol and focal point for local residents, New Jerseyans and students of history. The orchard where the battle occurred is now known as the Princeton Battlefield. 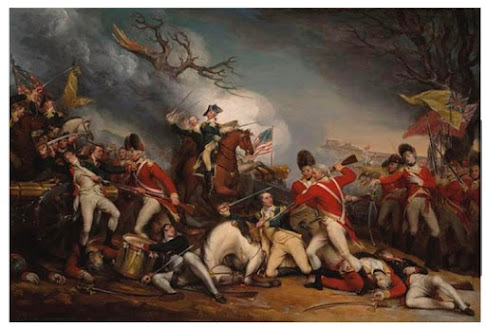 The Death of General Mercer at the Battle of Princeton January 3, 1777,
by John Trumbull, Yale University Art Gallery
The Mercer Oak conspicuously stood alone in the battlefield for almost 300 years until a storm damaged it beyond repair in 2000. Prior to that, it was immortalized in a 1994 romantic comedy, I.Q. That film centered around famed physicist Albert Einstein with key scenes that featured Meg Ryan and Tim Robbins sitting in front of the mighty oak, surrounded by a protective wooden fence.

Some years earlier, I shot my own footage of the tree, farmhouse and battlefield for a short video I created which compiled Revolutionary War sites and monuments throughout New Jersey and Pennsylvania. My video predated the anachronistic fence and, as such, remains the only existing film or video footage of the Mercer Oak in that natural state, according to John Mills, the curator of the battlefield park and Thomas Clarke Museum, which apparently keeps a copy of my video in its research library. 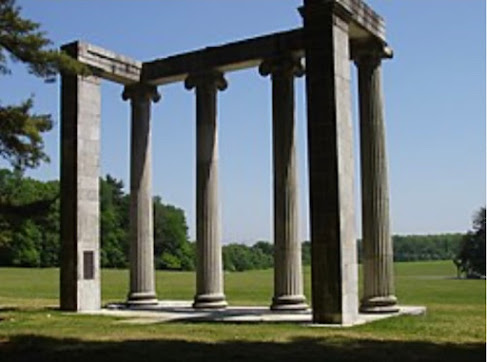 Ionic Colonnade and stone patio marking soldiers' graves
In 2010, Mills told me he was amazed at the changes in the Clarke house and the battlefield since the video had been shot with several other trees having also disappeared. Thinking back thirty years ago I recall Mills, then living in a wing of the Clarke house, lighting some antique candles and allowing my assistant and I to shoot throughout the house and barracks.

The Thomas Clarke House, off Princeton Pike (Mercer Road), is currently closed due to Covid rules but the park is open daily from dawn to dusk and there are outdoor weekend tours at 11am and 2pm on Saturdays and 2pm on Sundays; weather permitting. 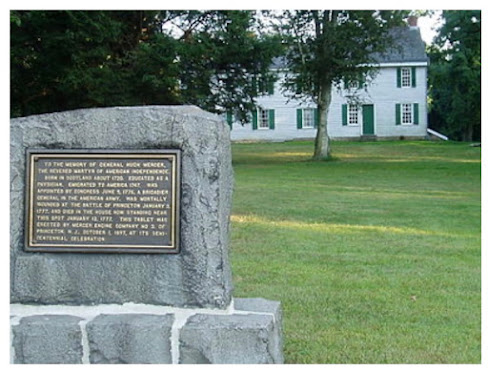 Mercer Memorial, Clarke House
Above three photos, courtesy of Wikipedia
When in Princeton, stop by and see for yourself where and how these events took place at that crucial moment in America’s history. Of course, the tree may be gone but that which it represents lives on in history as well as our minds and our memories.
Email ThisBlogThis!Share to TwitterShare to FacebookShare to Pinterest
Labels: Albert Einstein, American Revolution, Battle of Princeton, battlefields, General Mercer, Hugh Mercer, I.Q., Mercer Oak, New Jersey, Oak trees, Princeton Battlefield, Princeton New Jersey, Revolutionary War
Older Posts Home
Subscribe to: Posts (Atom)