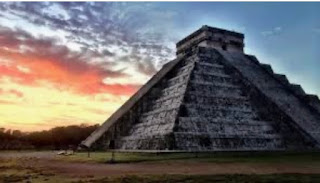 In the Yucatán Peninsula of Mexico lies the ruins of Chichén Itzá, the elaborate city of colorful pyramids, steps, graves, plazas and temples housing murals, altars, masks, carvings and other renderings.

Chichén Itzá is believed to have been a populous community as well as military fortress and a center for worship and commerce.

Ominously, some structures within the city served as the site of countless sacrificial ceremonies. Humans were certainly believed to have been sacrificed, along with gold and jade to Chaac, the rain god during the Cult of the Cenote.

Another marvel evident in Chichén Itzá’s dazzling remnants is the Mayans’ brilliant pursuit of astronomy. Biannually, shadows can be observed on the steps of the Temple of Kukulkan during the autumn and spring equinoxes which form the shape of a serpent that slithers downward to the bottom steps as the sun sets. The city’s observatory also allowed for the forecasting of solar eclipses.

After its excavation in the 19th Century, much of what we now know of the ruins was learned and studied by scientists and scholars who are still trying to keep up with its complex history. 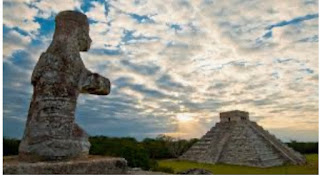 But what ever became of the Mayans of the city and why did they flee? These are questions that have never been unequivocally satisfied. Perhaps it’s simply too early to know. Those answers may lie in the riddles that adorn the city’s stone walls and haunt all souls who walk their ancient paths, searching in vain for an ancient clue. Maybe Itzá just a mystery.