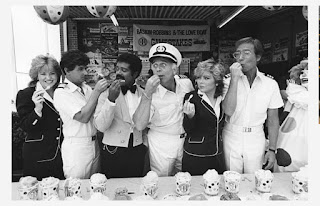 One industry that seems to have been hit considerably hard by the pandemic lockdowns is that of the passenger cruise lines. New cases of Covid-19 among many Carnival and Disney crew members has led to an extension of sailing hiatuses for most lines until the end of the year with full capacity operations on hold till at least next year.

For the time being, those setting a course for adventure, their minds on a new romance will have to settle for weekly reruns of one beloved and slightly unusual TV show. 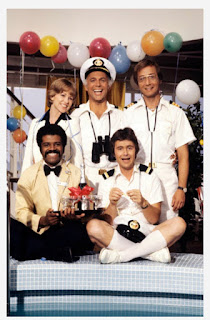 Airing for a successful nine seasons on CBS, The Love Boat debuted following three TV movies that introduced its stories centered aboard the Pacific Princess cruise liner to audiences in 1976. Produced by network wiz Aaron Spelling, Love Boat was unique as an hour-long sitcom that featured a well-cast crew of likable regulars who interacted with legendary guest stars, generally playing the ship’s romance-seeking cruise guests. Though additional cast members would appear as the series progressed, most of the original regulars remained throughout the series run.

Gavin MacLeod memorably portrayed Captain Merrill Stubing, the ship’s respected father figure and boss who is curiously never seen checking in with the bridge or consulting with deputy captains or officers. Instead, Stubing ignores all ship personnel with the exception of a cheery cruise director(Lauren Tewes), a wry yeoman purser(Fred Grandy), a sagacious ship doctor(Bernie Kopell) and a jovial bartender(Ted Lange). Stubing’s chief responsibilities seem to consist of roaming the deck to pry into his guests’ personal matters while sporting his magnificent tan. 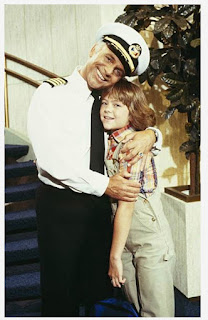 By the third season, Jill Whelan joined the cast as Stubing’s lovable daughter Vicki. In the show’s final season, someone hatched the dastardly plan to feature a recurring team of Vegas-style showgirls dubbed The Love Boat Mermaids, who routinely took to the stage to assault evening dinner crowds with atrocious Flashdance-inspired song and dance abominations. All of it, of course, was done in the name of mindless escapism, with an emphasis on consistently light comedy and drama which was balanced in a crafty manner that kept its viewers amused and engaged.

The show’s sexual subtext is surprisingly more obvious than one might recall as the situations and dialogue prove that the preoccupation with sex on shows like The Love Boat were just as prominent as in shows today, if not more so. The difference is the veiled manner in which the era required it to be addressed as opposed to the blunt and direct language now permitted in entertainment accessible to all ages. 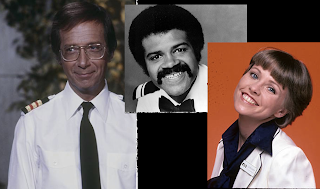 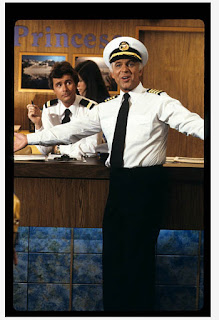 Sex does, in fact, seem to be a primary motivation for Stubing’s bachelor crew(Doc, Gopher and Isaac in particular), who chase skirts as though they’ve been away at sea for year-long solitary voyages.

Even as the stories’ middle-aged guest stars trade one-liners and witty banter by poolside, a parade of young scantily-clad women and men, otherwise never seen on the ship, conspicuously flaunt their bods in the near background while posing awkwardly atop the uncomfortable perimeter of the soundstage pool careful to avoid any noise or splashing.

The Love Boat’s enduring appeal may, in fact, be the impressive roster of Hollywood greats, some making final appearances, who sadly, are now mostly gone. Even more sad is noticing the many ostensibly unknown young actors and actresses appearing alongside the famous veterans who had perhaps hoped and worked towards stardom that never came, despite frequent television exposure. 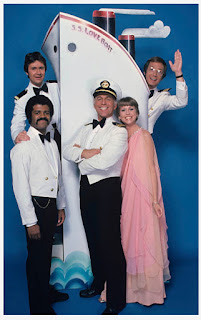 Very few of the younger guest stars were, in fact, recognizable names whereas nearly all of their older co-stars had already achieved success long before. It poignantly exemplifies just how short-lived and unrealized television careers can actually be for the average actor.

Well, If all this has properly primed you for a bon voyage then I’m sorry to say you’ll have to remain ashore for a spell. Until then, the next best thing can batten down the hatches for the real deal.

Do you sometimes need to see the world through media as a substitute for being there?

In any case, good luck and save me a place at the Captain’s table!