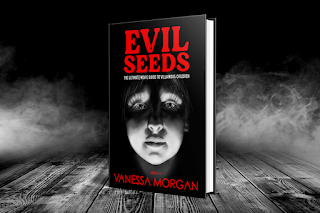 Hear ye! All horror enthusiasts and movie aficionados should immediately seek out a new book called Evil Seeds: The Ultimate Movie Guide to Villainous Children. An exhaustingly comprehensive movie reference guide on horror films featuring evil kids, it features reviews from over 40 international writers of which I was very honored to be included.
Agglomerating this extraordinary collection of invaluable essays is author Vanessa Morgan who also contributed many such reviews to the book herself. Vanessa is the author of the books- Avalon, Drowned Sorrow, The Strangers Outside, A Good Man and Clowders. In addition, she is a screenwriter and blogger as well as host and programmer for several European film festivals.
Recently, Vanessa answered some questions for me that should help shed light on her unique and enlightening new publication.
What is it about evil kids that frightens us so much?

I believe it has a lot to do with children being just like us, yet being different enough to stand apart, especially when there is something "off" about them (like the blonde wigs they used on the dark-haired children of Village of the Damned). The same goes for elderly people. Give them subtle macabre makeup or make them move strangely, and they can be absolutely frightening (the old-lady scene from It Follows springs to mind here). And when we are menaced by those over whom we thought to have absolute control – those who are smaller, weaker, and intellectually less developed – then is there anything left besides feeling utterly powerless?

Is this one of the first reference books on this particular topic to ever be published?

I have found one academic book in English, focusing on only a handful of classics (The Bad Seed, Village of the Damned), and one in French, equally serious in tone and aimed at literature. However, Evil Seeds is the only reference book that covers nearly all of the evil-child movies ever made (nearly 250 feature films from 40 different countries, and even more minor evil-child appearances in other movies). I wanted to create a book that not only gives readers insight into the stories they love, but also gives them plenty of new ones to discover.

How is Evil Seeds different from your previous reference guides?

When Animals Attack and Strange Blood very much started with the contributors and their unique vision on, and experience with the film. They were odes to love to particular films within the subgenres of animal-attack movies and offbeat vampire movies. Evil Seeds, on the other hand, is encyclopedic in nature as it covers nearly all the titles that exist within this particular subgenre.

What is your favorite ‘evil kid’ flick and why?

I'm completely in love with The Children of Ravensback (1980). I realize it's not the most intelligent or classy evil-kid movie out there – on the contrary – but it contains all of the elements that make a movie like this fun: creepy children, lots of murder scenes, subtle humor, and a great atmosphere. At the beginning of September, I screened and introduced this film at the BUT Film Festival in Breda, the Netherlands, to people who had never even heard of The Children before, and they were all in stitches. And what a delight to see my favorite on the big screen.

Do you have a particular recollection of seeing any of these films for the first time? How did it affect you as a young writer?

The first evil children that come to mind that scared me were the Grady twins from The Shining and the brothers from Salem's Lot. I watched Children of the Corn countless times on television when I was in my teens, but I don't think it holds up that well. I remember showing Bloody Birthday to my younger siblings, who weren't into horror at all but thought the film was amazing (especially the nudity) and wanted to watch it over and over again. I was also lucky enough to see The Good Son (1993) in cinemas as well. All these films started a passion that resulted in this book.

Do you find that there are characteristics of this sub genre that are unique to the different countries that produced them?

I love this question because I think this is the more interesting aspect of a book like this one. As with other film genres, these tropes often mirror the culture in which they are produced. In India, horror movies about evil children often involve the fear of black magic, whereas Ireland loves tackling fairytales about elves and changelings. In the Philippines, the evil baby Tiyanak is part of the cultural heritage. As the country grew its religious belief systems, the Tiyanak's characteristics evolved accordingly. Once the Spanish colonized the Philippines, the inhabitants were Christianized. The population copied the Christian values that abortion and non-baptizing are sins, so the myth transformed into Tiyanaks being souls of babies who died before baptism and later evolved into vengeful spirits from aborted fetuses.

On the other hand, the appeal of movies such as The Exorcist and The Omen was so huge internationally, that their cinematic influence was felt in countries where Christianity and the Devil weren't part of the main religious belief system (such as Egypt, India, Turkey, Japan, or Hong Kong), and this resulted in unofficial remakes and copycats. 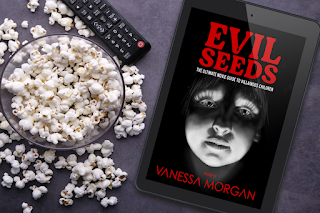 What can your readers expect from you next?

I have MANY ideas for upcoming movie reference guides, and I probably won't wait too long to start a new one because I love the process of creating a book like this and introducing readers to obscure movies. But I have other projects I need to finish first – organizing the Offscreen Film Festival in Brussels, renovating my new apartment, writing the screenplay and short story that I already said yes to, and in between all that, promoting this book and cuddling my cat Romero.

Evil Seeds: The Ultimate Movie Guide to Villainous Children is now available from Amazon (click to buy). Check it out!