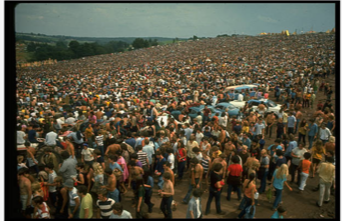 "There's supposed to be a half million people
here by tonight. Can you dig that?"
Last week marked the 51st anniversary of the Woodstock Music and Arts Fair held in Upstate New York in the summer of ‘69. The unprecedented event became a cultural milestone and a defining moment for a generation. Perhaps a topic of contention at the time, it has since developed a symbolic legacy, embodying the spirit of musical and communal harmony. 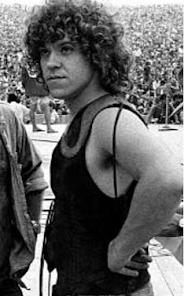 Promoter Michael Lang
Conceived by a young promoter named Michael Lang, the undertaking began with a team of investors, organizers and workers who tirelessly assembled a roster of the era’s most prominent rock and folk acts including Santana, Crosby, Stills, Nash and Young, Ten Years After, Sly and the Family Stone, Country Joe and the Fish, Janis Joplin, Sha-Na-Na, Ravi Shankar, The Band, Joe Cocker, Melanie and Joan Baez.

The festival was scheduled to run for three days and underwent a change in venue a number of times until a dairy farmer named Max Yasgur signed on to host the festival on his 600-acre farm in Bethel. By that point, it was too late to complete the building of fencing around the site and the completion of the stage became prioritized until the day of the festival. 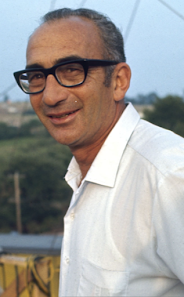 Landowner Max Yasgur
As this happened, word-of-mouth promotion brought over 400,000 more attendees than expected, forcing the organizers to put the festival on for free and cope with what was then declared a state of emergency by New York’s governor Nelson Rockefeller. The resulting traffic jams, sanitation conditions, bad weather and shortage of food and first aid became the subject of national headlines. Nearly no news sources reported on anything related to music.

Early on, Lang and company realized they would lose everything but kept the show going nevertheless. The mammoth crowd too, endured the inconveniences, sharing in the challenge as a makeshift family unit, seeing the weekend as an opportunity to realize their ‘peace and love’ ideals. 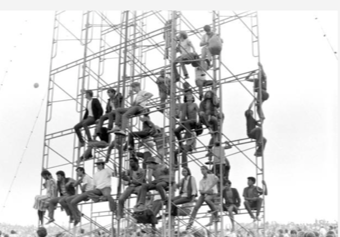 "Please get off those towers!"
Many there, in fact, seemed to know they were participating in something historic. Asked by a reporter why he didn’t seem upset by the financial calamity, one of Lang’s team members pointed to the positive happenings around them. It was all worth it to him. (Try to picture that spirit in today’s pop music industry.) Eventually, the losses were recouped by revenue from the festival’s documentary and soundtrack albums. 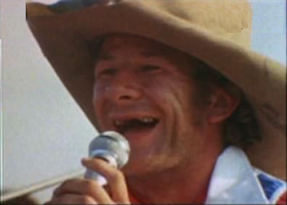 Wavy Gravy: "What we have in mind
is breakfast in bed for 400,000."
The organizers’ acceptance of government aid was particularly cited by Objectivist writer Ayn Rand as evidence of the ultimate futility of the love generation. To Rand, the Woodstock hippies were “Dionysian” nihilists who favored unbridled emotion and squandering over reason and productivity as seen in the festival’s chaos and depletion of resources and amenities. Without the establishment’s interference, she claimed, their utopian experiment would have been immeasurably more disastrous. 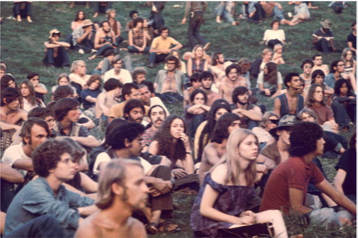 Camping in a 'sea of mud'
Rand may have missed something more poignant, however. The unprepared attendees likely descended on Bethel under the faulty assumption that their basic needs would be met by the festival’s organizers. The purpose of the weekend was to turn a profit for the investors, not to prove to the world that hippies could survive in a self-created microcosm. One half-million young people had endured unpleasant conditions in a disaster area for three days and there were allegedly no reports of violence. That’s a staggering fact, especially in light of today’s multitude of tiny street protests that invariably turn violent and incendiary. (Incidentally, those are the ones that we’re consistently being told are “peaceful.” So it’s okay.) 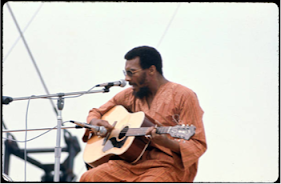 On August 15th at 5 PM Richie Havens
opened the festival.
Max Yasgur had little in common with his young guests. He was a middle-aged working class conservative who supported the war in Vietnam but he strongly defended the hippies’ right to free speech.(That’s yet another irony considering that our contemporary voices of dissent will extend no such courtesy to anyone like him today.)

The Woodstock film featured a touching moment where Yasgur addresses the crowd.

“I think you people have proven something to the world... This is the largest group of people ever assembled in one place... A half a million young people can get together and have three days of fun and music and have nothing but fun and music.” 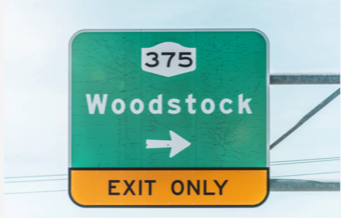 The festival didn't actually take place in Woodstock.
At 49, Yasgur looked startlingly old for his age and two missing fingers on his right hand were a reminder of the hard and often dangerous life a working farmer leads.

Following the festival, he was boycotted, sued and shunned by his neighboring townspeople. He opted not to rent out land for more concerts and died only a few years later. 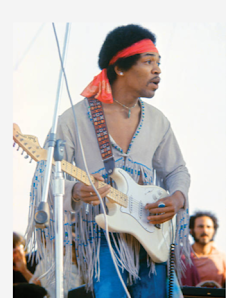 Jimi Hendrix, honored with
closing the festival, was
the highest-paid performer.
The concept of Woodstock was never successfully repeated. The record-breaking attendance was topped but no gathering could ever again unify a generation or capture the attention of the world. The sad paragon of that fact came in July of 1999 when a four-day show held in Rome, New York aimed to be another unnecessary new version of the famed namesake for ‘Generation X.’

Woodstock ‘99’s rampant commercialism, violence, arson, looting, rape and sexual assault confirmed the notion that the spirit of Woodstock can’t be summoned up for profit or cheap thrills.

Woodstock will remain in the hearts of many, not as an event, but a state of mind, representing music as a communal force and a universal identity. 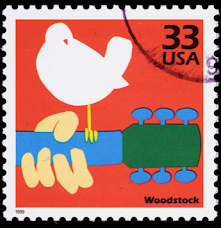 “The one major thing you have to remember... is that the man next to you is your brother, and you’d damn well better treat each other that way because if you don’t, then we blow the whole thing, but we’ve got it right there!”