This Wednesday saw the 75th Anniversary of V-J Day, in which the world recognized the official conclusion of World War II. After Imperial Japan surrendered and accepted the agreed terms, President Harry Truman addressed the nation with the momentous news. 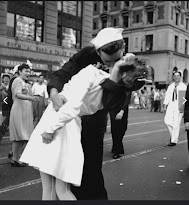 Inevitable celebrations erupted in numerous cities and public squares as the sight of many men (mostly returning servicemen) kissing nearby women became typical of the festivities. Though forcing unrequited smooches would be considered egregious by today’s standards, it seems more understandable in light of the joy Americans were suddenly sharing after years of sacrifice, danger and separation from loved ones and homeland. The kissing fest wasn’t so much selfish aggression as it was a natural impulse that many expected to be befitting an extraordinary and historic occasion. 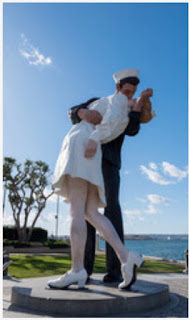 If it all happened today, the moment’s symbolic significance would undoubtedly be lost on most, sadly eclipsed by the literal image(as it always is).

One wonders if such an outcome could ever now occur at all. The Greatest Generation won its war with its persistent unity, something this nation may never again achieve.

Sadly, there are parts of the story that we have been sufficiently able to repeat.

The “victory riots” in San Francisco are the disturbing yet forgotten side to the jubilant celebrations of V-J Day. Mobs made up mostly of enlisted Navy men, not returning from overseas, gathered in the Bay Area’s downtown streets, gradually getting drunk and losing control.

For three days the celebrations transmogrified into dangerous chaos as motorists were attacked, cars overturned and women dragged into the dark and assaulted. Businesses were vandalized and looted and buildings, cars and trolleys were burned and destroyed. Soon bystanders were being run down by out-of-control cars and attacked with weapons, wooden boards, garbage cans or bare hands. 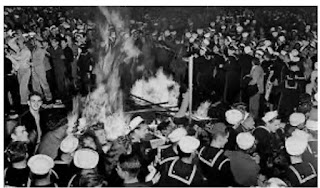 In the aftermath, thirteen people were dead, at least six women had been raped and over 1,000 people were injured in what were described as the deadliest riots in San Francisco’s history. Despite the overwhelming crime that had clearly occurred, no charges were pressed and no one was ever held responsible or accountable... for anything.

The authorities were most likely embarrassed by the tragic events and turned a blind eye to the matter under the convenient cover of the real celebrations that dominated world news that week. 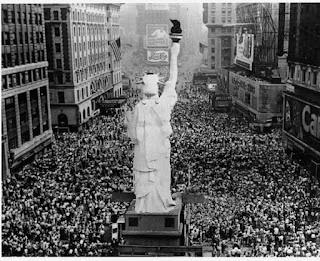 Why did this happen? How could history have lost track of something so devastating and shocking? It seems that a cover-up was not only easy but politically satisfying. Letting justice play out would draw attention to the failures of the city long after the hoopla of V-J Day had dissipated.
Perhaps it was thought of as ‘unpatriotic’ to pursue punishment after such a grand occasion. The troops had returned, America was victorious and it certainly didn’t need to go on a subsequent guilt trip. As we know all too well, anything with good intentions can be hijacked for a darker purpose while its perpetrators can easily disappear into dense, massive crowds. 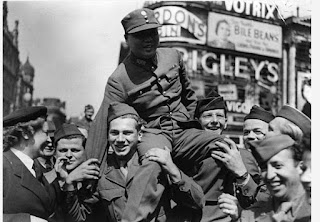 Why dwell on uncomfortable regrets when there are better things to recall-that symbolize hope, accomplishment, renewal and peace? Most of us don’t want to face sad and inconvenient facts. We’d rather ignore the worst among us, committing the worst acts and the inability of our leaders to stop or even recognize it.

I have two questions for you, and please feel free to use the contact form below: