I Saw That Puzzle 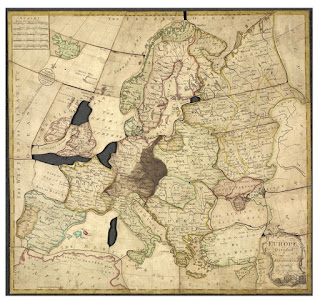 An early Spilsbury jigsaw puzzle
Cartographer John Spilsbury carved out a unique invention in 1766 when he cut a wooden map into an array of curved pieces as an educational toy. Since then an endless number of ‘jigsaw puzzles’ have been created in different sizes and shapes but the general overall concept remains so simple and effective that it has rarely changed in 200 years.
Nevertheless, the original wooden puzzles were soon created from cardboard and cut with a fretsaw (not a jigsaw). In the 1930s, hydraulic presses were employed in their manufacturing for increased mass production. During the Great Depression, jigsaw puzzles boomed in popularity and became a ubiquitous household item among adults as well as kids.
Later, roller presses replaced the larger expensive hydraulic machines used in the puzzle making for many years. Today puzzle sizes can range from 300 to 40,000 pieces.
"Jigsaw Puzzle Blues" by Fleetwood Mac 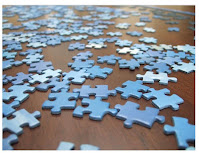 According to Wikipedia, jigsaw puzzles recently surged in popularity during Covid lockdowns. It’s a testament to the timeless and enduring appeal of a classic recreational hobby the world continually returns to time and again. Nothing really puzzling about that.
Email ThisBlogThis!Share to TwitterShare to FacebookShare to Pinterest
Labels: classic games, classic toys, Coronavirus, Covid, Great Depression, jigsaw puzzles, Puzzles

Understandably, we can all use a tip or two to make life easier, now and then. Perhaps even I can share a few modicums of advice learned from some previous experiences. You might find them useful or conversely view them as laughably trite, but when all is said and done, they can’t hurt.
Why should anyone listen to me? Well, I suppose nobody should tell you what to do, and that being the case, I’m definitely just as qualified as nobody. So why not try this out anyway as I now admit to having run out of wax museums to write about.
Watch That Ten-spot!

This is for anyone who works with cash registers. Occasionally a paying customer will hand an employee a ten-dollar bill and insist that it was a twenty after getting their change. This is often done mistakenly but it can similarly be played as a scam.
When I worked in retail I had a simple method to prevent this. Various store workers sometimes tell me they also practice it yet I’ve witnessed unpleasant arguments over this very situation inside stores or businesses. Similarly, none of my co-workers did it which again goes to show that it’s not practiced universally.
After identifying a bill as a ten, simply place it aside from the other tens, away from the cash drawer but preferably close by. When your customer disputes it, the actual bill can be presented as it hasn’t yet been put away. That will satisfy both parties and hopefully put the matter to rest.
Mind That Stove
If you’re watching something in the oven or on a burner and it’s not being timed, keep an oven mit on your hand until it’s ready. This will insure that you remember even if a distraction takes you far away from the kitchen. Plus- incidentally it’s the latest fad.
This *%#@ Bag Won’t Open! 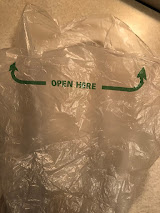 How many times do I have to assist fellow shoppers who can’t open the plastic bags in the produce section? Some of those bags are nearly impossible to separate, especially as your fingertips become dry. Reach for something wet or moist before rubbing the openings of the bag. You wouldn’t believe how much time and embarrassment it can save you.
Don’t Get Locked Out
Ever lock yourself out of your car? Usually this occurs when you manually lock the inside door and then shut the door with your keys inside. I’ve been there. Stay in the habit of locking the door only after closing it, using a clicker (fob) or the key itself.
You Snooze, You Lose

Do you sometimes wake up to your alarm clock and shut it off to get some extra rest only to find you overslept? When you need to avoid this, place the clock far enough away that you’ll have to get out of bed to turn it off (I never claimed these were brilliant).
I know- some of these seem obvious but that’s why it’s easy to forget how much they can come in handy. I’ll try to feature more in subsequent posts but until then feel free to share your thoughts.
Email ThisBlogThis!Share to TwitterShare to FacebookShare to Pinterest
Labels: advice, everyday solutions, everyday tips, helpful hints, Useful tips 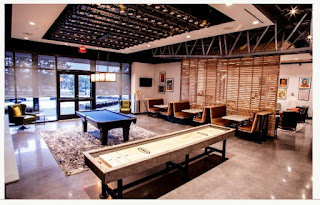 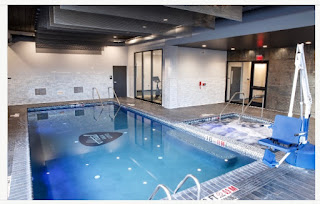 Along with a 3,000 square foot space catering to live event productions which has attracted acts such as U2, Beyoncé and The Eagles, the hotel is known for its Per Diem-Lititz restaurant serving farm fresh food and cocktails. Guests can also unwind in an indoor pool and enjoy spa tubs, fireplace patios and their state-of-the-art fitness room.
With a friendly staff, spacious ‘rock tour’ styled rooms and an experience that “brings music to millions worldwide with a one of a kind lodging adventure,” the Hotel Rock Lititz will undoubtedly fit the bill. For more information, click here!
For those about to rock, we salute you!
Email ThisBlogThis!Share to TwitterShare to FacebookShare to Pinterest
Labels: Lancaster County, Pennsylvania hotels, Pennsylvania inns, rehearsal spaces, Rock and Roll hotels

All photos provided by Gettysburg Heritage Center of Gettysburg, PA. 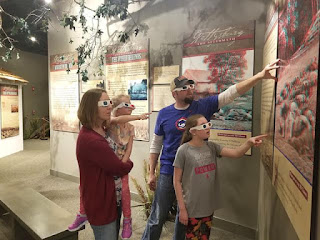 Planning a visit to Gettysburg, Pennsylvania? You’ll want to get out your quill pen and ink bottle and put the American Civil War Museum/ Gettysburg Heritage Center in your itinerary. The acclaimed museum and gift center has been a frequent destination for millions of history buffs for more than 50 years and it continues to grow and evolve.

Created and built by CM Uberman, a World War ll refugee from Poland, the ambitious venture was opened to the public in 1962 and shows no signs of slowing down its mission to educate and enlighten visitors with a fascinating and informative experience. 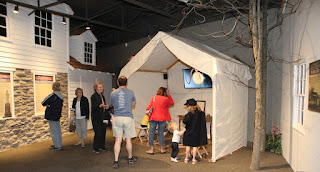 Once boasting 35 sets and over 300 wax figures, the presentation now centers around an innovative interactive show preceded by a 20-minute award-winning film, “Gettysburg Animated Map”, to introduce some perspective on the pivotal three-day battle, including life-size figures in a recreation of ‘Pickett’s Charge.' 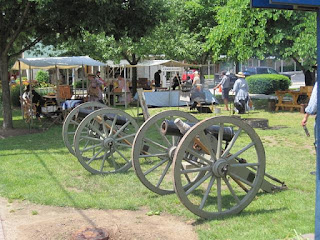 In 2014 the museum auctioned off 95 wax figures in addition to many backdrops and antique props. Where have all the soldiers gone? Now we finally have some answers.
Don’t leave without a souvenir, either. The lobby’s gift center has an extensive assortment of books, collectibles, toys, apparel and replicas.
Hours are seasonal, so call ahead. Admission is $9 for adults and $7 for children with free admission for children under 5. Call 717-334-6245 for more info: https://www.gettysburgmuseum.com/.
Email ThisBlogThis!Share to TwitterShare to FacebookShare to Pinterest
Labels: Civil War history, Civil war museum, Civil War wax museums, Gettysburg, Gettysburg Pennsylvania, Gettysburg wax museum, Wax museums

The Dungeon Awaits You 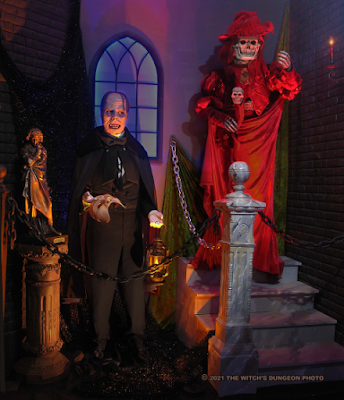 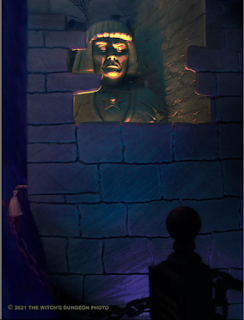 Paul Wegener as THE GOLEM
In today’s mega-world of ‘Marvel Universes’, and ‘zombie nations’, many like myself long for the simpler “creature comforts” of yesteryear when ‘classic’ monsters ruled the horror/sci-fi landscape and dominated the pantheon of horrific heroes. Thanks to Cortlandt Hull, those devoted ‘monster kids’ need only visit his exceptional movie museum in Plainville, Connecticut— although the experience is certainly anything but plain. 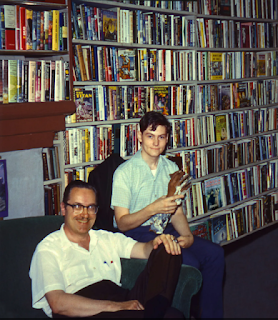 FORREST J ACKERMAN (left)
with Cortlandt Hull
Hull is the creator/curator of the Witch’s Dungeon Classic Movie Museum, specializing in detailed, life-like wax reproductions of iconic Universal Monsters characters like Frankenstein, Dracula, The Wolf Man, The Phantom of the Opera and the Black Lagoon’s Gill-man as played by screen legends like Boris Karloff, Bela Lugosi, Lon Chaney (both) and Henry Hull (Cortlandt’s great-uncle, who played the title monster of 1935’s Werewolf of London).

The stellar monster movie attraction, regarded as the longest-running one in the nation, gives a 20-minute tour featuring the recorded voices of Hull’s friends, June Foray (best known as the voice of Rocky on The Adventures of Rocky and Bullwinkle and Friends) and the legendary Vincent Price. The museum also boasts film screenings (beginning in 2022) plus a gallery of horror movie memorabilia and relics. 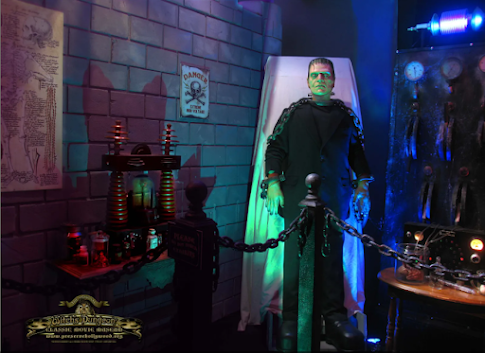 Boris Karloff as THE MONSTER
Incredibly, Hull began the venture in the town of Bristol in 1966 at the considerably young age of 13! Much enhancement and improvement has been made since those ‘monster craze’ days but he has remained true to his original vision and dedication to the classics. 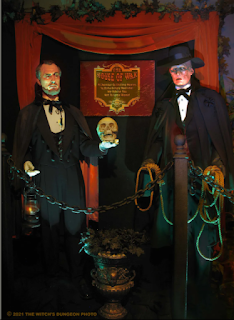 Vincent Price in House of Wax
Authenticity is one of the Dungeon’s obvious hallmarks as details like Larry Talbot’s ‘wolf’s head’ cane and the statue of Beethoven in the Phantom’s catacombs draw fans straight into its characters’ frightening worlds. Headpieces in the exhibit created by Oscar-winning makeup artists John Chambers and Dick Smith are the real deal, having been employed in various classic films.

Hull currently has the Invisible Man and the Bride of Frankenstein in the works and plans to introduce them by October. When not presiding over his Dungeon in Connecticut, he can be found touring many of his monsters across the country at various exhibitions and conventions. To see it all, though, you’ll need to stop into the Witch’s Dungeon at 103 East Main St., open weekend evenings by appointment (Adults $8, Children under 12 $4. Call (860)583-8306 before 4PM to schedule). Click here for more: https://preservehollywood.org/