Could this really be one of
New Jersey’s wonders?
While driving along Route 206 in South Jersey on the outskirts of the Pine Barrens, I was deliberating what possibilities might befit the final subject to round out my series on New Jersey’s ‘Seven Wonders.’ Suddenly, off the road I noticed a vision so incongruous I began to doubt my own sanity.

Two stick-like figures appeared to overlook the highway with a tubular pet at their feet. Just who was responsible for this superfluous display and what in the world of artificial intelligence did it all mean? 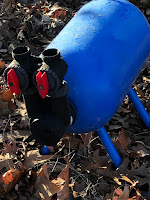 This pup won't give Boston
Dynamics any reason to worry
Well, aside from the fact that the three objects were assembled from water tanks and stand before Water Resources of New Jersey, a water softening business, little else seems to be known of them. While admittedly curious and unexpected, they wouldn’t exactly cause Philip K. Dick to blush and, frankly, I don’t quite see why they are as moderately famous as they are.

In any case, to compensate for my scarcity of ideas for a seventh wonder, I’ll give an honorable mention to these space-age tin woodsmen instead. Besides, their creative owner was decent enough to offer his services to any of my readers interested in commissioning him to adorn their front yards with his artwork.

What has everyone said to that? So far, all responses have been a resounding, “Tanks, but no tanks.”