In a previous blog I commented on unexplained phenomenon which I only approached in a perfunctory paragraph. As such, I thought I’d elaborate a little on that fascinating topic.

I’ve always been drawn to historical mysteries and incidents or subjects that lack official explanations. Some that naturally come to mind are the subject of UFOs, Bigfoot, ghost sightings and unsolved crimes like the case of D.B. Cooper, the mystery man in a business suit who hijacked a Boeing 727 flight to Seattle and apparently jumped off with $200,000 ransom money, never to be seen again.

As a kid, I was intrigued by these kinds of stories and I even created my own scrapbook of photos and news clippings devoted to Bigfoot, the Loch Ness Monster, the Bermuda Triangle and other subjects that spurred my imagination. My favorite was Bigfoot- he was always enduringly fascinating as a possible intermediate form between man and his simian ancestor that was still elusively roaming the dense wild. 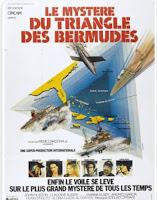 One of my favorite shows back then was Leonard Nimoy’s ‘In Search Of...’ which sought to explore these phenomenal items through interviews and intensive research. The shows were brief and as a result only touched upon the topics with no real conclusive answers to the weekly mysteries but I still think the subtle and equivocal style they employed was far superior to those currently produced in similar-themed shows.

The contemporary versions on networks like Nat Geo, History and Investigation Discovery tend to overreach their analysis by exhausting dead-end hypotheses and showing off state-of-the-art technologies for sheer sensationalism. Sometimes it’s better and far more interesting from an entertainment aspect to simply let the subject matter speak for itself.

What fascinates you? What is it about the way it is presented in a book or show or movie that makes it even more fascinating?