The Future Ain’t What it Used to Be 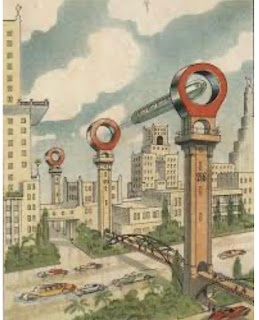 Conveyor belt sidewalks, pneumatic sky shuttles and video screen telephones— These were the assumed luxuries of the years to come in our collective imaginations of years gone by. In some cases our predictions proved to be fortuitously adept. Despite unforeseen technological progress, however, numerous expectations remain unrealized.

In turn-of-the-century France, the popularity of Jules Verne’s science fiction works such as Twenty Thousand Leagues Under the Sea inspired a postcard series projecting life in the year 2000. Through their varied illustrious renderings, the desire for a more conveniently ordered and functional world is evident in every aspect of life from travel, industry, farming, housework, grooming, leisure and education. 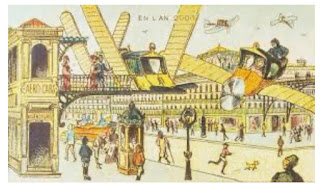 These paintings and illustrations are now categorized as ‘retrofuturism’, a term denoting their hopes and fantastic predictions. The term later applied to literary, film and television genres that incorporated the style into narratives for entertainment effect. 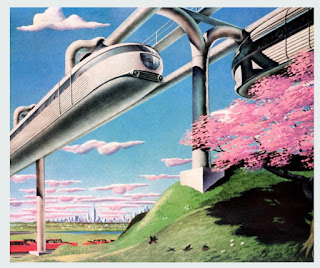 Understandably, the artists and the science that they drew on were limited to the existing knowledge and trends of the time. The result was a fascinating combination of logical extrapolation and mysteriously vague yet prescient concepts.

For some reason, it was speculated that humans of the future would conduct many of their daily activities underwater, including riding on seahorses and employing whales as public transportation. 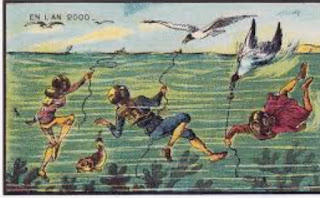 Indeed, the use of prehistoric animals as slave labor was a frequent feature of daily life for television’s Flintstones, something Michael Chichton apparently overlooked in his research for Jurassic Park where he popularized the myth that dinosaurs and man were separated by 65 million years of evolution. 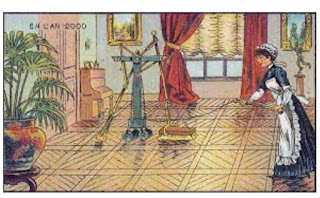 Alarmingly, much of what typifies life in our current era can be glimpsed in obvious ‘prototype’ form in some of these images. Helicopters, cellphones, computers and robots were all imagined here, decades before their proper introduction into the world.

In retrospect, the artwork seen here is a credit to the fervent imaginations of these visionary artists. They represent what innovation, science and creativity have already accomplished as well as the many inventions and possibilities that remain on our horizon.