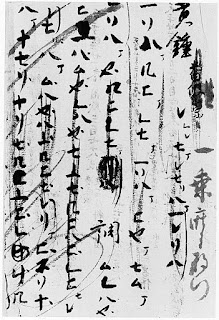 Who discovered music? Were music and art both inceptions of the same inventor? From the earliest writings, there is evidence of music in man’s world and culture.
Allegedly, scientists discovered the earliest musical instrument dating between 43,000 and 42,000 BC. 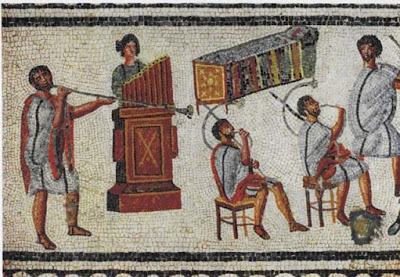 The hydraulis was a pipe organ using water and air pressure.
The initial instances of western music are mainly Greek and their notations and condition are such that it can only be speculated and extrapolated as to how they should sound. Popular Greek instruments like the lure and the aulos, a double reed instrument, were both based on instruments from Egypt and Mesopotamia.
In Greek philosophy, music was believed to represent harmony throughout the universe. The incorporation of musical study in philosophy led to what we now describe as music theory. 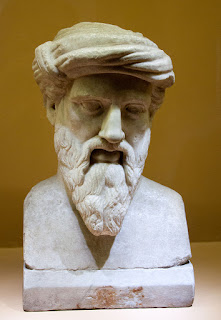 Pythagoras developed several music theories.
Poetry was an integral component of art during this period and it figured significantly into much of the period’s music. Song, dance and poetry were regularly acted out to honor the Greek gods.
The Romans further elaborated on the music of the Greeks. Traditional Roman melodies based upon Greek ones were set to scripture, leading to what are termed Early Christian Chants and later, Gregorian Chants.
In China, a legend maintains that the founder of Chinese music is Ling Lun who, in an effort to mimic bird sounds, carved pipes from bamboo. Bone flutes found in Henan date back 9,000 years ago.
Carnatic music in ancient India was adapted from Persia and Islam. They are noted for their religious nature and singing style. The tambura played a drone which became a major feature of Raga, a subsequent classical Indian style.
These musical foundations proliferated throughout the ancient world influencing life and culture and informing disciplines such as art and dance as well as linking to the studies of mathematics and physics. Next week we’ll venture into the ancient world of art. See you then.
Email ThisBlogThis!Share to TwitterShare to FacebookShare to Pinterest
Labels: ancient instruments, Ancient music, Chinese music, early music, Greek music, music theory, Roman music

Gotta Have the Funk 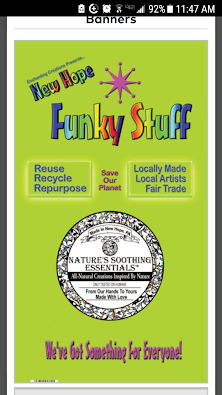 New Hope, Pennsylvania is a popular East Coast tourist area known for its style and eclecticism and the shop that epitomizes all things eclectic is Funky Stuff at 87 South Main Street.

Inside you’ll find homemade jewelry, handmade candles, essential oils, herbs, incense and body mists as well as an exclusive product line in Nature’s Soothing Essentials. In addition, there are a variety of concert poster reproductions, sepia prints, stickers, patches, art and world instruments! Unlike many stores these days, you’ll actually hear some good music playing inside. How refreshing is that? 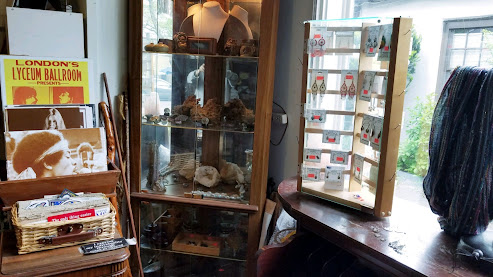 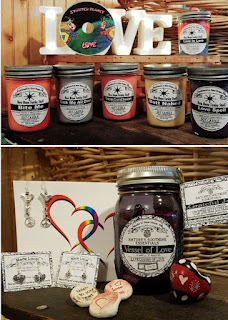 Owner and operator, Jessica Hammer has resided in the region for 21 years, initially working with Spinsters Records until its closing, after which she started Funky Stuff.

During Covid, Jessica remained closed for more than a year but her business has reopened and enjoys support of both locals as well as out-of-towners as she looks forward to a new season.

“Since I’ve reopened, the customers have been great.” Another popular attraction of the shop is Lovey, a rescued dachshund. One of Jessica’s mantras is ‘Reuse, Recycle, Repurpose’ and she often refurbishes old furniture and other items that can be seen in the shop. 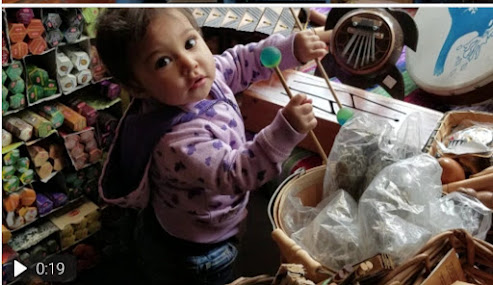 So when you’re feeling funky, stop by and meet Jessica (and Lovey) and check out their enchanting creations. That’s the stuff! 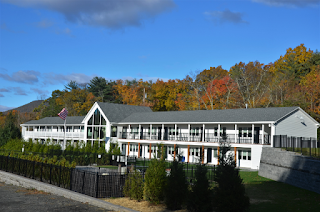 Passing through Route 28 in upstate New York? A visit to the delightful Hotel Dylan might be a highlight of your road trip, particularly for a lover of music and art. Situated at the base of Overlook Mountain in Woodstock, Hotel Dylan is a nod to the culture, music, lifestyle and artistry of a generation including a music legend who once lived in the prominent town and artists colony. 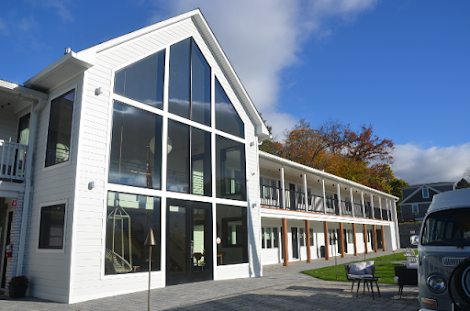 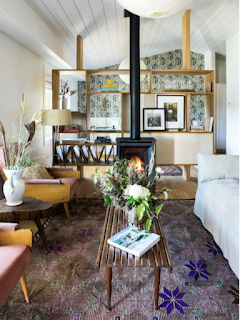 Incidentally, it’s a stone’s throw from the site of the legendary 1969 rock festival whose musical heroes are given their own eleven thematic rooms in the hotel (now expanded to 22). Named primarily for subjects of acclaimed festival photographs hanging in each room, they include; The Baez, The Jimi, The Sebastian, The Havens, The Joplin, The Slick and The Levon (Parents will have to explain it all to their kids).
Though having undergone considerable renovations and reconstruction since being built in 1966, the building was once a landmark inn, attracting a variety of famous musicians. At one point, it even saw existence as a brothel. 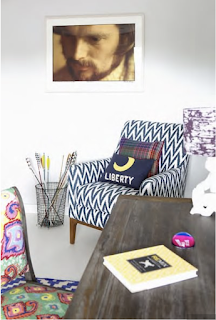 Opened in 2013, Hotel Dylan was the joint venture of four individuals, each focusing on different angles of the business. Among the four is Darryl Jack, a pro golfer whose extensive experience in the hospitality industry led him to also act as the hotel’s resident manager.
Hungry? The hotel’s own Santa Fe Woodstock restaurant and bar features fine Mexican cuisine and along the outside lawn guests can enjoy fire pits and a heated saltwater pool. Hiking and skiing in the Catskills are just two of the activities that guests have convenient access to.
Not to be confused with NYC’s Dylan Hotel, Hotel Dylan in Woodstock, NY should greatly satisfy the ‘Bohemian’ curiosity and provide a unique and rewarding boutique hotel experience for all visitors. Why not walk right in and sit right down?
Email ThisBlogThis!Share to TwitterShare to FacebookShare to Pinterest
Labels: Bob Dylan, Boutique hotels, Catskills, Hippies, Hotels, Woodstock, Woodstock Festival, Woodstock New York 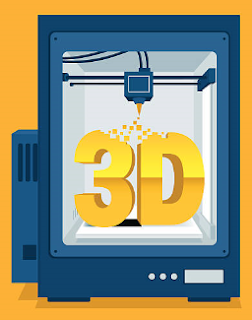 You’ve probably heard some considerable buzz by now regarding a technological process dubbed ‘3D printing.’ To boil it down, the concept essentially begins with a 3-dimensional model and applies it to a process which replicates that model layer by layer by scanning thin materials to produce a physical representation.

What distinguishes 3D printing from traditional manufacturing methods is its ‘additive’ process which builds its components throughout its manufacturing as opposed to introducing previously manufactured elements to the product. This radical departure from previously dominant manufacturing techniques seeks to expedite and eliminate costs and reduce tools, thereby revolutionizing countless industries. 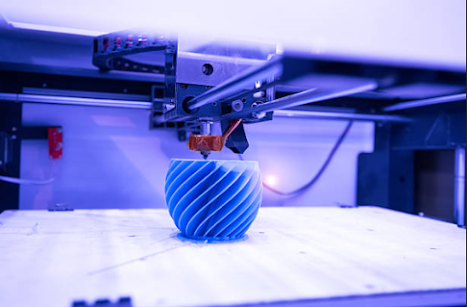 The elaborate process involves file preparation and conversion, necessary prior to printing stages. The complexity of these steps also depend upon the products and the type of printing being made. Various processes include stereolithography, DLP (Digital Light Processing), Extrusion, Inkjet, SDL (Selective Deposition Lamination) and EBM (Electron Beam Melting). 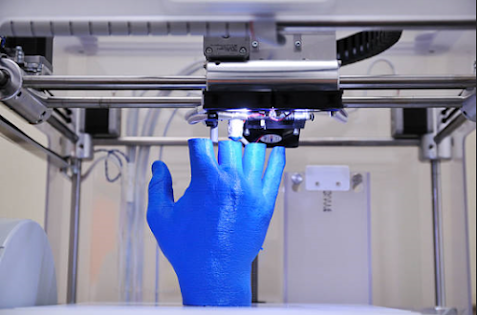 Material types that are utilized in 3D printers include ceramics, plastics, metals, paper, food and even living tissue. Another benefit that the process claims is its energy efficiency. 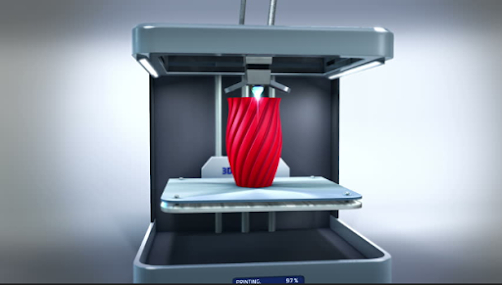 The various markets in which 3D printing is expected to reimagine are vast and diverse. Prototypes are currently being developed for multiple businesses and consumer needs with no signs of letting up. Which field or industry will reap the most rewards from 3D printing remains to be seen. Of course it won’t be seen the way we saw it before, but that’s the whole point, isn’t it?
Email ThisBlogThis!Share to TwitterShare to FacebookShare to Pinterest
Labels: 3-D, 3D, 3D printing, 3D technology, additive processing, manufacturing

These days It seems commonplace to scan the local movieplex listings and expect at least one or two features to be presented in 3-D or IMAX. In the early Fifties, however, such a presentation was something of an ‘event’ and, to some degree, still is. Nevertheless, the cynic in me can’t help but feel that it’s all just an elaborate excuse to hike up ticket prices and charge $9 for the obligatory tub of popcorn. 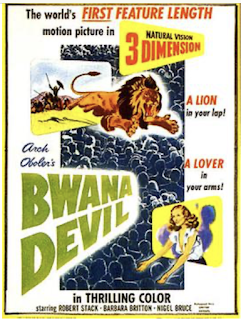 Competition with television entertainment is the primary factor in 3-D’s resurgence just as it was in the mid-Twentieth Century. The theater experience needed to be drastically different and offer an element that couldn’t be replicated on a small screen.
Often 3-D movies from the Fifties featured gratuitous moments where objects or actors lunged and leaped towards the camera, however impractical and awkward those displays might have looked in 2-D. These scenes, clearly staged for the sole purpose of accenting 3-D’s assets, nevertheless complimented their reputations and came to be expected by moviegoers. Modern features like Avatar and Gravity go out of their way to avoid using the process excessively or distract from their stories. As a result, they don’t seem to conjure up particularly memorable three-dimensional scenes— yet everyone remembers the paddle ball guy in House of Wax.
The first film to lucratively mix low-budget fare with color 3-D was Bwana Devil, an indie adventure flick about big game hunters going after killer lions in Africa. It proved popular with audiences and grossed $5 million. Columbia Pictures and Warner Brothers both took notice, producing the 3-D studio features, Man in the Dark and House of Wax starring Vincent Price. 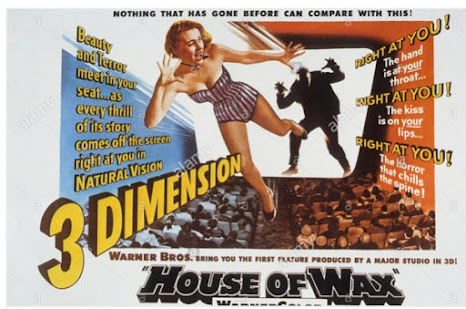 Westerns soon hitched their wagons to the 3-D train with Fort Ti starring George Montgomery, Hondo starring John Wayne and Taza, Son of Cochise. The horror/sci-fi genre, well-suited to the sensational gimmick boasted It Came From Outer Space, Robot Monster, Creature From the Black Lagoon and its sequel, Revenge of the Creature. Other 3-D films included The Diamond, the MGM musical Kiss Me Kate and Alfred Hitchcock’s Dial M for Murder. 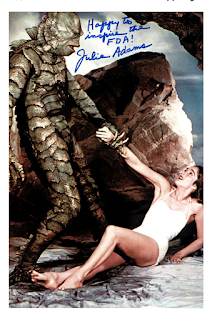 After the Spanish-American Eurowestern, Comin’ at Ya!, 3-D experienced a resurgence in the early 1980s when the process invariably became a profitable means to jump start tired franchises like Friday the 13th and Jaws.
Since then it has seen intermittent reception but 3-D’s implementation is generally a resort the industry occasionally falls back on when returns are low. The more the movies turn their profit and audiences’ tastes favor genres suited to the technology, the more we can expect to see things ‘comin’ at ya.’ Sometimes it’s that extra dimension that makes the difference.
Next week we’ll explore the intriguing and curious industry known as 3D Printing. What is it? How does it work? Will it affect our future? Stay tuned.
Email ThisBlogThis!Share to TwitterShare to FacebookShare to Pinterest
Labels: 1950s 3-D films, 1950s 3-D movies, 3-D, 3-D cinema, 3-D film, 3-D movies, 3D
Newer Posts Older Posts Home
Subscribe to: Posts (Atom)