Cycle Saveges
Recently I watched some old Hong Kong Kung Fu flicks and biker movies (Why has no one created a mash-up genre combining the two?). The biker flicks I just viewed were as follows: The Cycle Savages; Hell’s Belles; Run, Angel, Run!(all 1969) and Chrome and Hot Leather(1971).

The biker films of the Sixties were largely exploitative action dramas made on slim budgets and drawing on ‘straight’ America’s post-war fears and anxieties regarding the marginalized and outcast. They never sought to portray these subcultures accurately but rather as caricatures of their urban nightmares.

Run, Angle, Run!
Usually the films pitted rival gangs against each other or saw them clash with townspeople, minorities, hippies or authority figures. Often protagonist and villain were interchangeable, the symbols of the hated and the vanquished emblazoned on leather vests and German helmets. During many of the other youth market-oriented features of the era, bikers were played as clowns or even buffoons. Ultimately the biker image became inextricably linked with that of Marlon Brando’s ‘Wild One’, an edgy and prickly but misunderstood rebel.

Hell's Belles
Rebellion is a frequent cinematic theme as well as a persistent cultural one. In reality, the ‘outlaws’ in most biker gangs express defiance in their rejection of motorcycle associations as opposed to governments and laws.

Today the concept of the rebel is also increasingly subjective and image-based.

Are you a rebel in some way? Do you think it might even be pretentious to think of yourself as such?

“Get your motor runnin’.”
Steppenwolf 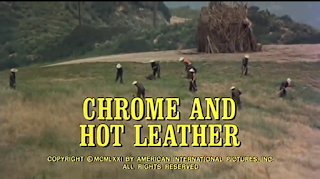