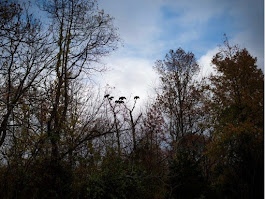 Strangely situated within the otherwise populous state of New Jersey, not far from adjacent cities Philadelphia and New York lies an ecological wilderness known as the Pine Barrens. It features its own unique climate, ecosystem, wildlife and history, not to mention a fabled winged monster- The Jersey Devil. 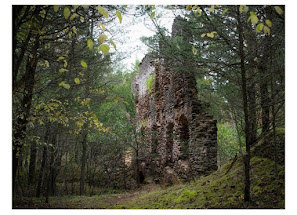 The remains of the Harrisville Iron Furnace
The dearth of development in Ocean County’s Pinelands stems back to the days of European colonization when the area’s sandy soil was deemed largely unsuitable for growing and farming.
Nevertheless, the Lenni Lenape Indians who inhabited the region long before their arrival used controlled fires in the pursuit of cultivation and hunting, a practice more or less still employed today. 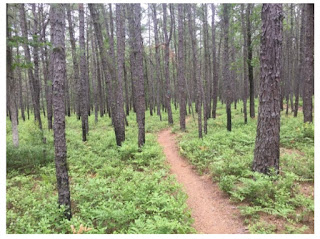 The Penn Branch Trail
Through the years, everything from iron, charcoal, paper, cabinetry, cranberries and blueberries were produced in the Pine Barrens. Some parts are said to have been the site of liquor bootlegging and smuggling by crime organizations. As a result, there remain not only ghost towns in the wake of those previously stated industries but, allegedly, abandoned remains of stills and the graves of victims silenced by Prohibition-era hit men(!)
Other areas feature somber reminders of tragedy. A monument to Emilio Carranza marks an area in the town of Tabernacle where the Mexican aviator was killed while returning to Mexico City from New York. 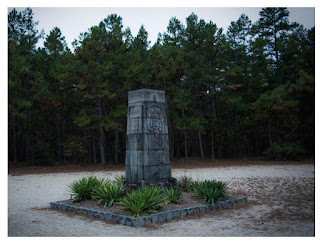 Memorial of Emilio Carranza
Campgrounds are readily available as are ideal opportunities for hiking, cycling, kayaking, canoeing, fishing, hunting and horseback riding.
While over one million acres of the Jersey Pine Barrens have been designated as a National Reserve and International Biosphere Reserve, conservation continues to be a primary concern as well as that of potential forest fires. 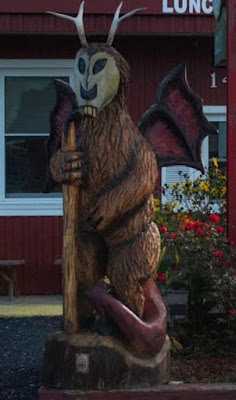 Jersey Devil statue--no one dares tear it down!
Hopefully, the future will see the Pinelands remain the largely pure and undeveloped landscape it has managed to stay thus far. Of course whatever that future brings could be just as cryptic and inscrutable as the Barrens themselves on a quiet, dark and shadowy New Jersey night.
Email ThisBlogThis!Share to TwitterShare to FacebookShare to Pinterest
Labels: aviation, bootlegging, camping, colonization, ecology, gangsters, Lenni Lenape Indians, New Jersey, Pine Barrens, prohibition, The Jersey Devil
Older Posts Home
Subscribe to: Posts (Atom)