The World is Your Cloister 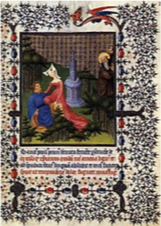 Limboujrg brothers, from the
"Belles Heures du Duc de
Berry." French, 1399-1416
Merging two eternally favorite attractions, museums and gardens, the world-famous Met Cloisters in Manhattan are an assemblage of medieval artifacts situated on four acres of rolling green hillsides overlooking the Hudson River.
Opened to the public as part of the Metropolitan Museum of Art, the Cloisters have become an iconic New York tourist site and occasional film locale.

Alexander the Great
or Hector of Troy.
From the Nine
Heroes tapestries.
South Netherlandish,
c. 1385
Built in 1938 by architect Charles Collens in Fort Tryon Park, the grounds consist of three chapels in addition to a collection of European art dating from the 9th to the 17th Century. They also boast medieval gardens, paintings, sculptures, manuscripts and stained glass windows.
The four ‘cloisters’ or galleries were brought to New York from Europe throughout the 1930s, their relocation financed by John D. Rockefeller Jr. who also purchased several hundred acres of the Palisades to remain undeveloped in the Cloisters’ exterior view. Other major donors included banker and philanthropist J. P. Morgan Jr.
In 1948 the grounds were used in location filming for Portrait of Jennie starring Jennifer Jones and Joseph Cotten. Twenty years later the Cloisters’ steep hillsides provided the setting for a climatic motorcycle chase in the Clint Eastwood film, Coogan’s Bluff.

Bonnefont garden and cloisters
The museum is generally open Thursday through Monday from 10am to 5pm and offers group tours, virtual events and a gift shop. All in all, an unequaled journey through the Middle Ages, only minutes from the city, awaits the most adventurous and curious of time travelers.
Photos courtesy of: Wikipedia.
Email ThisBlogThis!Share to TwitterShare to FacebookShare to Pinterest
Labels: Cloisters, Filming Locations, Gardens, J.P. Morgan Jr., John D. Rockefeller Jr., Met Cloisters, Middle Ages, Museums, New York City

Never Promised You a Hanging Garden

There once was a magnificently spellbinding garden in the Neo-Babylonian empire— or was there?

Built during the 6th Century BC under the rule of Nebuchadnezzar II, the fabled structure was said to feature a dazzling array of plants and flowers as well as sculptures and fountains interconnected among sloping mountain-like terraces.

Conflicting contemporary accounts of the gardens’ location and features as well as the absence of any mention of them in Babylonian records have led many historians to doubt their legend’s legitimacy. The possible existence of a similar site in the Mesopotamian city of Nineveh supports some hypotheses that suggest it was mistakenly imagined to exist in another time and place. 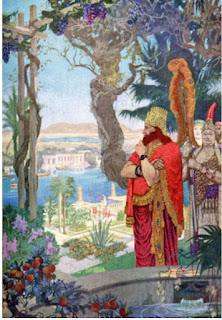 Still others maintain that the gardens were most likely among many treasures in the Babylonian king’s domain and survived for several centuries through different empires.

History, for some reason has shrouded the Hanging Gardens in near darkness. Perhaps the future will shine better light on the ancient mystery and reveal the story behind it. Until then, our imaginations can fill in the blanks and the missing piece of an unceasingly wondrous puzzle.